Due to the possibility of dividing the server-side into several microservices, this architecture has great modularity. This allows people working on development to be focused on one or more modules, without knowing the overall business logic of the software, developers need to know only those parts for which it is in charge are enough, as well as the connections with the modules with which these modules cooperate.

Each service performs a small set of functions and each service can be implemented in different technologies which is an additional plus because it is possible to take advantage of this technology to solve specific problems.

Database per service and data replication

Each microservice should have its own database. This allows the possibility of applying different types of databases for each microservice. An important rule of microservice is data sovereignty. The service cannot directly access the database of another service. Service should ask for those data from service whose database it is. A common way to improve performance is to replicate data between databases. Therefore, it is necessary to take care that when the data in one database change, the redundant data in other databases remain up-to-date. 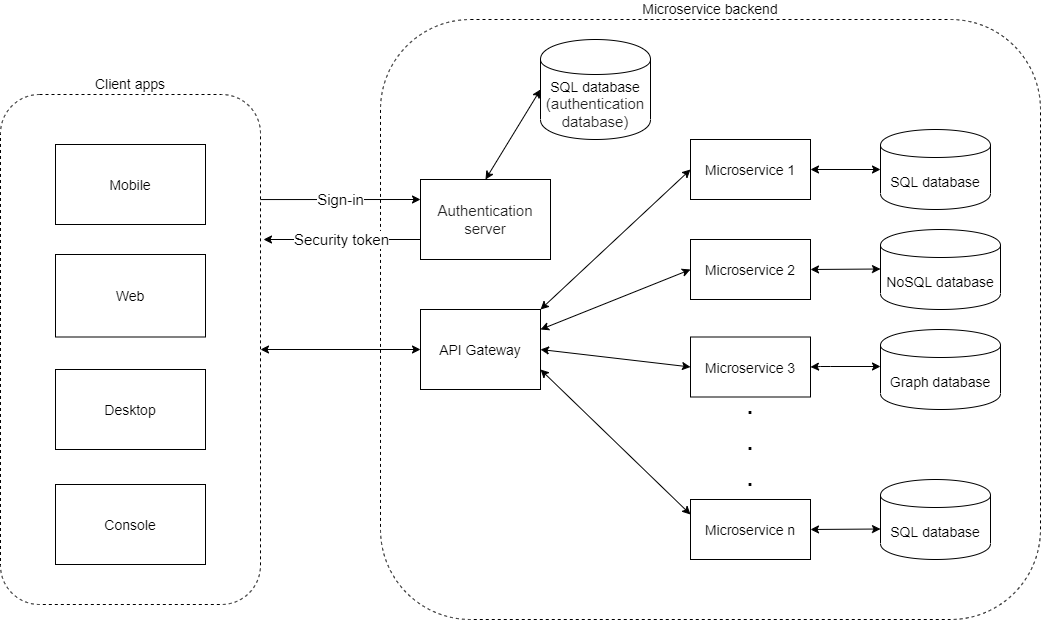 API gateway has also one network security advantage. When using API gateway you could be assigned public IP address only to API gateway and private IP addresses to all other back-end APIs. In this way API gateway is only one who is visible from the public network and also only one vulnerable to network attacks.

The biggest challenge in Microservice architecture is defining microservice boundaries. It is necessary to set boundaries in such a way that the services are loosely coupled to each other. Loose coupling is a concept of minimizing dependence. When services are loosely coupled, a change in one service requires minimal change in another service or no change at all. Loosely coupled services should know as little as possible about the service they are working with. One way to determine the boundaries between Microservices is to apply Domain-driven design (DDD) when designing a system.

The biggest advantage of loose coupling is scalability. Scalability is the ability of an application to resist an increase in requests and the number of users without the application itself having to change. This practically means that if the load on one functionality of the system is increased new instances of service are added which implements that functionality.

The challenge that also arises after the transition from a monolithic to a Microservice architecture is to change the way of communication. The two types of protocols used are synchronous protocols and asynchronous messaging protocols:

To achieve loose coupling asynchronous and communication message queue is used in Microservice architecture. Message queuing allows applications to communicate by sending messages to each other. Services communicate in such a way that one service sends a message to the message queue and each service subscribed to that type of message receives and processes it in its own way. When a generally accepted data format such as JSON is used for the message format then it is possible to implement each service in a different programming language. The message queue provides temporary message storage when the destination program is busy or not connected. When services communicate via a message queue, they are decoupled and can be easily scaled.

The application described in the business analysis section can be divided into the following microservice components:

Communication is subject to failures because it takes place between services that can be placed on different physical servers, which is not the case with Monolithic architecture. Due to additional communication between services, the performance of the system becomes slightly worse. Implementation and testing may take longer compared to a monolithic architecture but maintaining and upgrading the system is easier due to loose connectivity.